Let us take you on a guided tour to:

The total includes transport, lodging (bed & breakfast or full board) and park entrance fees. Water will be availed for the duration of the tour and the game drive. Other expenses like meals, laundry and drinks as well as all other activities provided for by the institution but not included in this package are for the account of the guests.

The activities are found in the four Regions of the Land of the Brave, namely, Khomas(Windhoek), Otjozondjupa (Otjiwarongo), Oshikoto(Tsumeb) and Kunene (Etosha & Kamanjab). The characteristics of the city and towns en route this trip, in a nutshell, are as follows:

Windhoek is the political and administrative capital of the Khomas Region and of the country.

Okahandja is known for the historical events/ developments which took place in/or around the town and is referred to and regarded as the garden town of the country. Other attraction is the Open Air Street Craft Market.

Otjiwarongo is the economic hub and administrative Capital of the Otjozondjupa Region. There is an area around Otjiwarongo known as Cheetah world. Two famous cheetah sanctuaries are found and are located in this area. Namibia has the largest population of cheetahs which are approximately 3000 in the country. The other attraction is the Waterberg Mountain/Plateau and National Park and some of the very big privately owned game parks are found in this area.

Tsumeb in Oshikoto is the gateway to the Etosha National Park and the mining town in the area and in addition is also famous for the semi- precious mineral stones which are found in big numbers as well in the same surroundings. Other highlight is the fascinating and famous two lakes, namely, Guinas Lake and the more popular Otjikoto Lake are also found some 20kms north of Tsumeb on the B1 Trans-Angola National Highway on the way to Etosha National Park. Lodging in Etosha National Park will be provided for at the Namutoni Rest camp close to von Lindequest entrance Gate at the eastern side of the park. Full game drive will be undertaken through the park with the exit via Galton Gate at the western side of the park.

Next area to be visited is the south western part of Damaraland. The iconic and famous Brandberg Massif an Inselberg in the Namib gravel plains, with the highest peak in Namibia known as Koenigsberg which is 2573m above sea level is found in this area. Brandberg is also famous for bushman rock art works of which the white Lady is more famous.
Some parts of Damaraland are famous for Desert adapted animals which include, inter alia, but not limited to, Elephants, Rhinos, Lions, Giraffes and others just to mention but few.

Other highlights and famous places of attractions are also found in this area, however, the flagship and the most famous attraction without doubt is the iconic Twyfelfontein.

Twyfelfontein is famous for Bushman Rock Paintings and Engravings. It is known and regarded as the world’s largest concentration of rock Art paintings. The age of the rock art viz paintings and engravings are fluctuating anything between 1000 & 10 000 years and is believed to be numbering approximately 2500. It was declared in 2007 by the Convention as the first UNESCO World Heritage Site in Namibia
The route will take us to the Central coastal areas including a short visit to Cape Cross, one of the biggest Seal Reserve, in the Dorob National Park, close to Henties Bay.

We will thereafter proceed to the Namib Naukluft Park before returning to Windhoek in the Khomas Hoch land/ Central Plateau.

Day 1: Pickup guests at the accommodation establishments in Windhoek and depart to Okahandja. Restrooms stop and depart to Mount Etjo Safari Lodge. Arrival at the lodge and check in followed by activities on the surrounding areas and those offered by the lodge like feeding of predators, this, however is optional. The rest of the afternoon is reserved for relaxation followed by dinner and retiring for the evening for night rest.

Day 2: Breakfast and depart to Otjiwarongo on the way to Etosha National Park via the mining town of Tsumeb. Quick stopover before proceeding to Tsumeb for a lunch stop. The main stop and a highlight before arrival at the national Park is to visit the fascinating Lake Otjikoto. Proceed thereafter to Namutoni Resort inside the park. Arrival and check in the afternoon and the rest of the afternoon is scheduled for relaxation and /or to undertake a game drive to the nearby water holes. Dinner and retire for the night. Night game viewing at the local water hole is recommended.

Day 3: Breakfast and depart to Okaukuejo Rest camp in the western side of the park on a full day game drive. This will be followed by a Lunch Break stopover at Halali Rest camp which is situated in the middle of the park. We will be continuing with the game drive until the arrival at Okaukuejo Rest camp. Subsequently the afternoon is reserved for relaxation followed by dinner and thereafter retiring for the evening and night rest. However, there is an opportunity for a late night game viewing at the water hole by the Rest camp!

Day 4: Breakfast and depart on game drive on the way and exiting the park through Galtons gate for Twyfelfontein in the southwestern side of Damaraland. Arrival at Palmwag Lodge. Check in at the lodge and the afternoon is free for relaxation followed by dinner and night rest.

Day 5: Breakfast and proceed to Twyfelfontein area, arrival at the lodge and check in. Subsequently visit the activities and places of attractions which include Twyfelfontein for Bushman art and the Damara Living Museum which is optional. Return to the lodge for the afternoon which is reserved for leisure followed by Dinner and retire thereafter for the evening.

Day 6: Breakfast and continue with the tour to Swakopmund via Uis a small mining town and a visit to Cape Cross Seal reserve north of Henties Bay. We will have blitz stopovers in Henties Bay and at the Sheila ship wreck on the way to Swakopmund. Continue with the trip and arrival in Swakopmund and check in at the accommodation establishment. The afternoon is reserved to partake in the inclusive activities like the Township Tour and Sandboarding. Optional activities offered by the local operators can be arranged with the assistance of the guide/tour operator. Dinner will follow which will be concluded with the evening rest.

Day 7: Subsequent to the breakfast the whole morning is reserved for activities with the guide and partake in the activities offered by the local operators as continuation of the previous day. Lunch is next on the program before departing on our last leg of the tour to the final destination, namely Windhoek. There will be Blitz stopovers at the towns of Usakos and Karibib for the use of restrooms, if need be. Our next major stop will be in Okahandja to, inter alia, visit the famous Open Air Street Craft Market and to attend to other essential needs before continuing to Windhoek our final destination. The guests will be dropped off at the places of their choices. 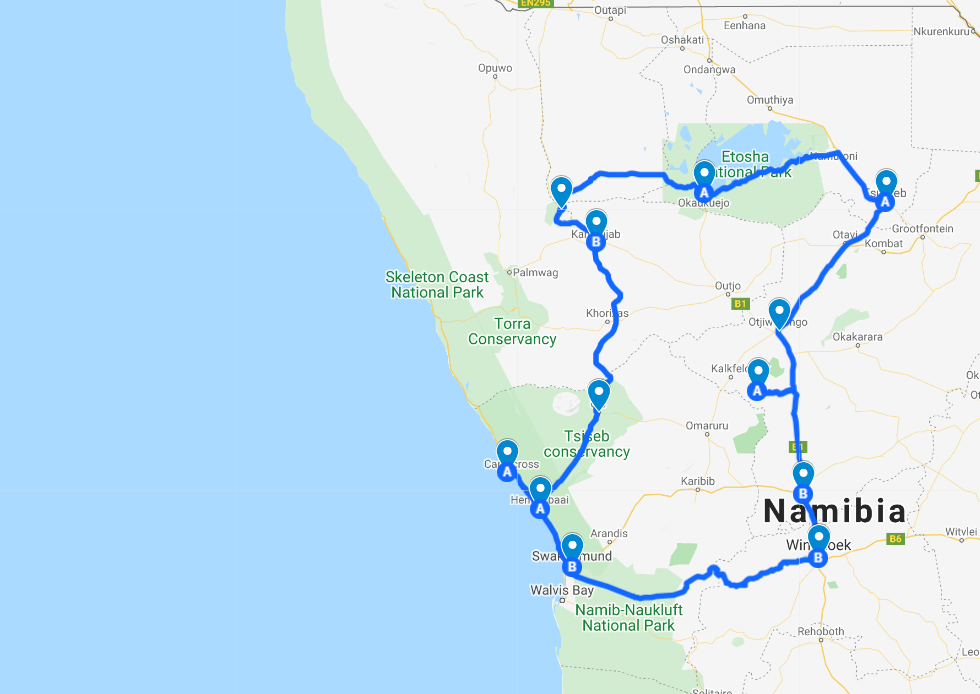 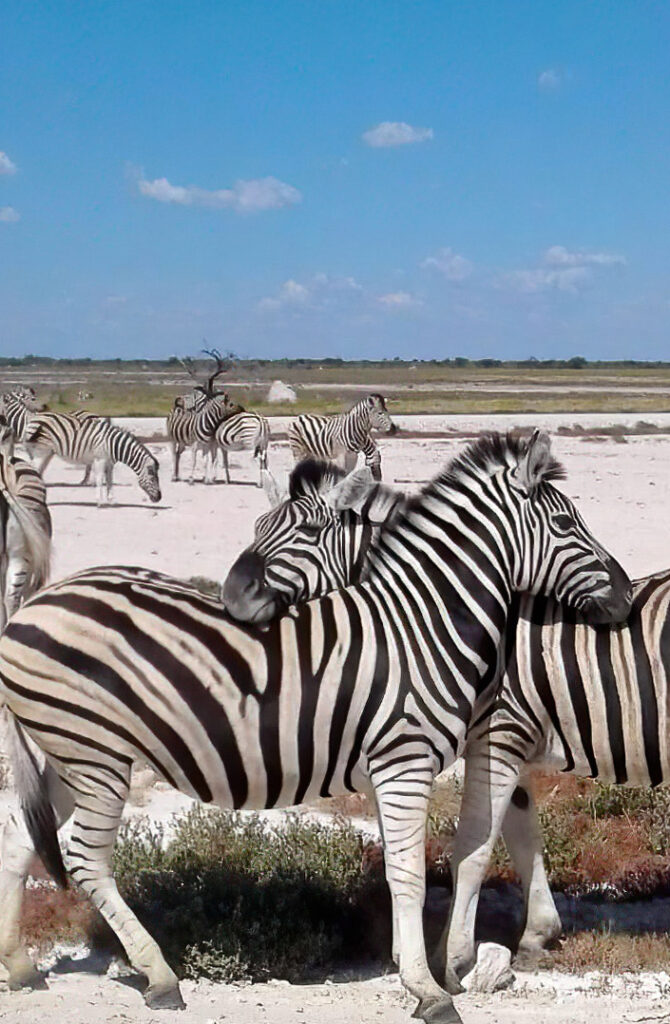 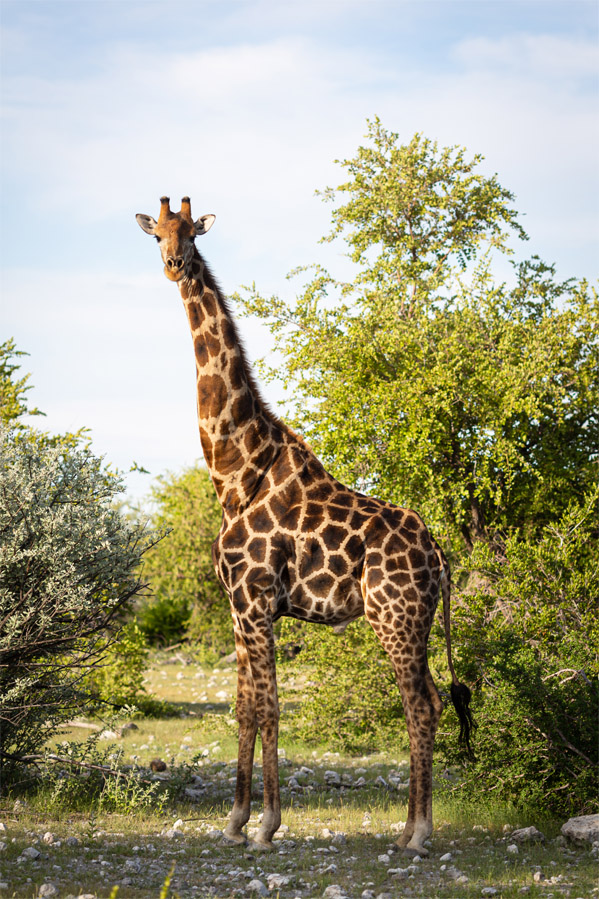